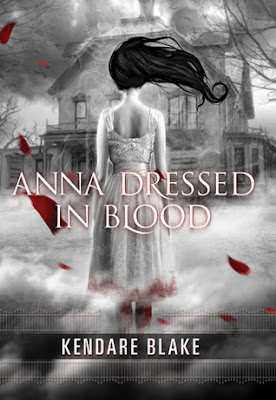 Cas Lowood has inherited an unusual vocation: He kills the dead.

So did his father before him, until his gruesome murder by a ghost he sought to kill. Now, armed with his father's mysterious and deadly athame, Cas travels the country with his kitchen-witch mother and their spirit-sniffing cat. Together they follow legends and local lore, trying to keep up with the murderous dead—keeping pesky things like the future and friends at bay.

When they arrive in a new town in search of a ghost the locals call Anna Dressed in Blood, Cas doesn't expect anything outside of the ordinary: move, hunt, kill. What he finds instead is a girl entangled in curses and rage, a ghost like he's never faced before. She still wears the dress she wore on the day of her brutal murder in 1958: once white, but now stained red and dripping blood. Since her death, Anna has killed any and every person who has dared to step into the deserted Victorian she used to call home.

And she, for whatever reason, spares his life (www.goodreads.com)

A few years back, I discovered the show "Supernatural" which I watched religiously until this last season (I'm pretty sure the new writer/producer/whatever ruined the show...just sayin').  Anyway, I loved Supernatural for several reasons, but the biggest was that it was something different - these guys were ghost hunters...they lived on the edge...they were hot in that bad boy ghost hunter way.  When I started Anna Dressed in Blood, I got those same warm creepy feelings I had while watching Supernatural.  I was hooked from page one.

This is probably one of the best debuts I have read in a long time and 'm on pins and needles waiting for the sequel.  It needs to be out NOW!!

But on to the review...let's start with Anna.  Anna has to be one of the most terrifying characters I have ever encountered in YA lit.  When Cas first lays eyes on Anna, she is a force to be reckon with - her black eyes, writhing hair and simple white dress dripping in blood along with the strength to rip grown men in half with one hand would definitely make me take a step back.  Her rage is uncontrollable - yet she spares Cas' life.  And try as he might, Cas cannot bring himself to kill her.  And so the story goes...with each turn of the page the suspense builds.  My heart broke when I learned of Anna's past, and my blood turned cold, as I became privy to the biggest twist I've read in a long time.

Blake's writing is really top notch.  The cast of characters she brings to the table are unforgettable.  Not only is Anna amazing, so is Cas, our troubled ghost hunter.  Reading through the pages, I came to feel Cas' pain, his confusion, and his anger.  I also loved seeing his friendship bloom with Thomas and Carmel.  Every character in this book had a purpose.  There wasn't one character that was there just because.  To me, that is what makes a book really good...knowing that every thing that is done, every character introduced, is done so with purpose.

All in all, Anna Dressed in Blood is a real page turner and will probably be one of the best books I read this year!!