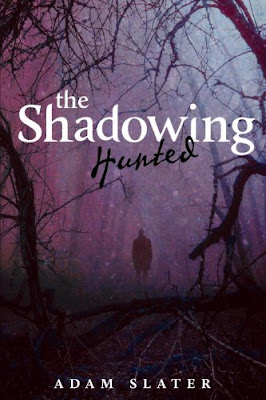 Once every century, the barrier between the human world and the demon realm begins to break down. Creatures gather, anxiously waiting to cross the divide, to bring death and destruction from their world to ours. This time is called The Shadowing.

Callum Scott has always known that there is a supernatural world out there—he’s seen ghosts for as long as he can remember. Lately, he’s had visions of children being brutally murdered by a terrifying creature. Then the visions start coming true, and Callum realizes that he’s being hunted, too.

Driven by a dark destiny, he must stand against the demons that threaten our world.

I hadn't heard anything about The Shadowing: Hunted until I received the galley from Net Galley. I was instantly intrigued by the cover shot, and looked forward to digging into the book. With it being fall, I was looking for something just a bit scary to celebrate the season. I wasn't disappointed.

Set in rural London, The Shadowing: Hunted, follows the life of young Callum. Callum has always been able to see ghosts, and has a special bit of "luck" that helps him to avoid trouble. Because of this Callum is a loner, making himself almost invisible to those around him. He tries to avoid trouble, spending his evenings hanging out with his grandmother at their tiny cottage in the woods.

I don't have a enough good things to say about this book. It kept me on the edge of my seat, had me checking to make sure my doors and windows were locked, and made me look twice at every cemetery I drove by. The writing was very good, and the story flowed from one scene to another. I found myself reading deep into the night, trying to figure out what was happening. I also thought this story was something fresh, and touches on other creatures of lure that have not been so overdone. I like learning about different creatures, and found that to be one of the biggest attractions to this book.

I'm looking forward to continuing on with this series.