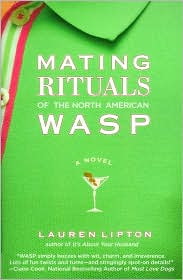 After arguing with her live-in boyfriend about his inability to commit, Peggy Adams flies to a friend's bachelorette party in Las Vegas, and wakes up next to a man she can't remember. Hung-over and miserable, she sneaks out of the sleeping man's hotel room and returns home to New York, where her boyfriend apologizes for the fight and gives her a Tiffany box containing a pre-engagement ring. Not what she expected, but close enough! The next day she receives a phone call from the Las Vegas one-night stand, Luke, claiming she's already married to him¬-and he faxes her the license for proof! Both are ready for an annulment, until Peggy arrives in quaint New Nineveh, CT, where Luke cares for his Great Aunt, and the old woman makes Peggy an offer she can't refuse (Barnes and Noble).

This was the first book I read after being back from vacation. I actually read about this on quite a few blogs and ran out to Borders to grab it as soon as it came out. I used to be a huge fan of chick lit when it first became popular, and I still really do enjoy it every so often. This book was no exception.

First off, I absolutely adored Luke Sedgwick, our dashing hero. Something about his total WASPishness had me just head over heels in love with him. I was really irritated with Peggy throughout the whole book because she just didn't seem to see what was directly in front of her. Her fiance, Brock, was a total and complete idiot and half the time, I don't even think Peggy liked him.

Secondly, the best character in the whole dang book was Luke's great aunt Abigail. She really added a lot to the story, and made the old Sedgewick mansion come alive. Her stories and her attitude about different things were priceless. She really did love Luke, and truly hoped for the best for him. Also, she was a woman who loved her family, and the traditions that family stood for. She was the true matriarch of the family.

This is a great summer read, especially for the nice warm day when you'd love to just sit outside and read a good book. I often found myself taking this outside, to sit on the patio and sneak in a few pages here or there.

Posted by Sunnysmileqt at 12:02 AM